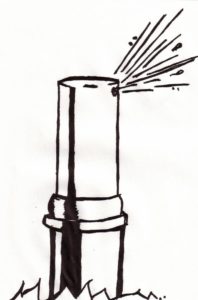 John Hart is the owner and operator of John Hart’s Irrigation, Inc., headquartered in Eustis, Lake County, FL. The company is a full-service Irrigation company.

John was trained in Irrigation System Expansions, Upgrades, Maintenance, Pump Repairs, and Pump Replacements. John and his wife Angela Hart which is the co-owner of the business, began their career when their son Dustin was 2 years old. Dustin was diagnosed with Autism at that age. John and Angela was unsure what the future held for their son, so they decided to start a business so that Dustin would not have any hold backs in his future. They take pride in their business and thrives to give their customers service with a smile.Outside of work, John enjoys relaxing and enjoying his family and Angela enjoys traveling as well as maintaining her website that she created to support the autistic. Inspired by their son, Angela has also created a unique symbol called the Autism Welcomed Decal which she is working to give the decals permanent homes in “Public Places”.

When it comes to providing expert Irrigation services, nothing takes the place of experience. John began working in Irrigation 30+ years ago and started John Hart’s Irrigation, Inc. in 1999. Angela has been in the irrigation business for over 20+ years.

One of John Hart’s Irrigation, Inc.’s  goals is to provide their Lake County clients with professional and affordable services.

The result, one of the most successful Irrigation companies in Eustis!

What does the business community think? The Better Business Bureau has awarded John Hart’s Irrigation, Inc. an A+ rating.

What do their customers think?

One fan of the company publicly wrote, “During the month of June we have had two occasions to call Hart’s Irrigation to check and repair our homes irrigation system. Both times they responded in a very timely manner and the technicians were very professional and polite. I recommend Hart’s to address any irrigation problems you might have.”.

Another fan of the John Hart’s Irrigation, Inc. publicly wrote, “My sprinkler heads, 2 of them had been broke since Oct. 19th. I couldn’t run the whole system. Honest hard worker showed up Wednesday 10/24/2018. I had been dealing with the company that ran over and broke the sprinklers, but they were dragging their feet. I highly recommend John Hart Irrigation. I would have lost my whole lawn if not for them. Thank you for fitting me in your busy schedule.”.

Having owner operated experts, like John providing knowledgeable and expert care is an asset to Eustis and Lake of County, FL.

Business owners take risks and often work long, exhaustive hours to service their clients. There are freedoms in owning a business, but these freedoms come at a cost. Rarely acknowledged are business owners like John and Angela Hart that employ people and ensure their staff are paid continuously. Sure, people earn their wages through their time, hard work and skills, but let’s take a moment and thank John for having and continuing the business ownership game that allows people an opportunity to produce and earn those wages.

Need Irrigation service? Give John Hart’s Irrigation, Inc. an opportunity by visiting them at 31838 Lakeview Dr, Eustis or by calling them at 352-357-9230.

In addition to running a successful Irrigation business, John and Angela supports their symbol that helps other families and autistic children.

John Hart, you are highly commended for your service to the residents of Lake County, for having and maintaining a business that adds to the financial well-being of FL and for your willingness to participate in social betterment activities.

The world can use more good news!

If you are or know a business owners that wants to expand and would appreciate a Spotlight, please contact Local Search Force at 727.888.5358 or visit us on the web by clicking HERE

The County Advisory Board is owned and operated by Local Search Force.

The County Advisory Board supplies the internet with positive stories about businesses and their leaders.

Local Search Force is the best on the planet in helping businesses get new customers.

Want help getting new customers or a Spotlight Story written on your firm? Call 727.888.5358, complete the form below or visit us online by clicking HERE.